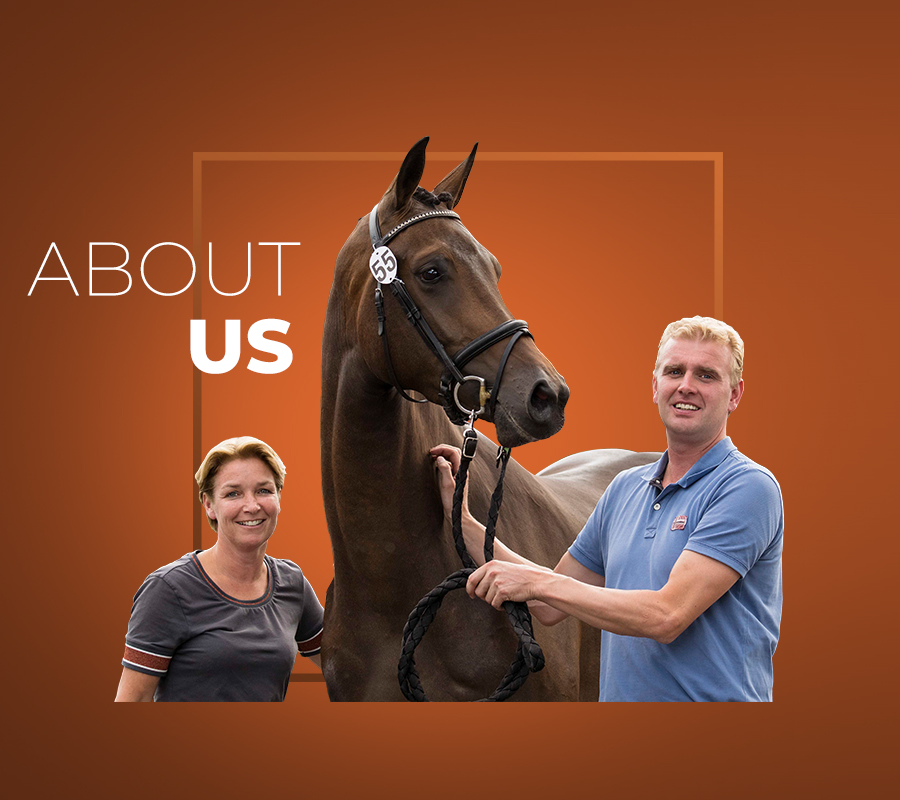 We are Sjaak van der Lei and Jenny Toes. Together we run our business StuDutch. We are a small-scale equestrian business with as aim the breeding, bringing on and training of quality dressage and jumping horses. StuDutch is also the exclusive dealer for a number of popular stallions. The name StuDutch is a combination of the English word ‘Stud’ and ‘Dutch’, the English word for Dutch. By means of our name we want to show that we are proud of Dutch breeding and proud of the fact that we are based in the Netherlands. 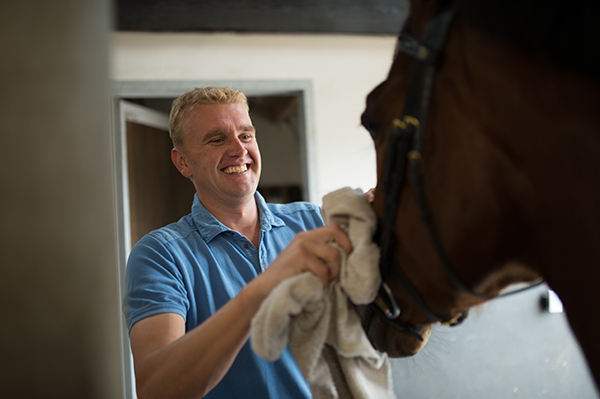 Born and raised in the Groningen countryside, farmer’s son Sjaak van der Lei grew up with horses. Horses were used on the farm in Houwerzijl from early on and even the progressive mechanisation could not deter the Van der Lei family’s passion for horses. Sjaak’s father bred using a few mares and older sister Agaat actively rode in the sport and later became a credible dressage rider. Sjaak himself combined his father’s and sister’s preferences. The interest in breeding was ever-present. From an early age stallion books and licensing catalogues were sifted through, and on TV stallions in the sport were watched more attentively.

Sjaak earned his living as a show jumper. At the age of nineteen, via contact with Kees van den Oetelaar, he was given the opportunity to replace Eric Van der Vleuten’s stable rider for a couple of weeks. It clicked with Van der Vleuten and the opportunity to stay longer was seized with both hands. Sjaak swapped his jumping yard in Groningen for Stal Van der Vleuten in Noord-Brabant and enjoyed several wonderful (learning) years. “I learned an unprecedented amount from Eric. I have tremendous admiration for his knowledge and know-how. He is also a super person and you could not wish for a better boss.”

During the period with Van der Vleuten, Sjaak followed the Masterclass in Deurne after which new challenges beckoned. After having ridden for the late Bert Goossens for a while, the next logical step followed which was to work for himself. Sjaak remained loyal to Noord-Brabant and tasted international show jumping.

Via his network, Sjaak succeeded in acquiring the exclusive covering rights for Cornet Obolensky for the Netherlands and part of Belgium. That was the start of a new branch, in addition to training and competing show jumping horses. Other stallions such as Comme Il Faut followed and the step to share the semen of these exclusive stallions reignited his passion for breeding. Interesting mares with a genetically strong background were purchased and inseminated with stallions from his own collection. And so Sjaak became breeder as well as show jumper and the circle was complete.

Sjaak van der Lei travelled a bit and rode horses for others for many years. This background provided him with a wealth of experience and developed in him a vision of the type of (jumping) horse required in the sport and in breeding. He says: “In the past I was criticised by others for results achieved. As a result you also learn to look critically at a horse. What type of horse do you want to ride? How should that feel? Firstly you want to have a good ride. Enjoyable riding is so important! Whether it be at 1.30m-level or 1.60m-level. A horse must want to reach the other side and want to do it for you, so that you can progress further together. He must therefore have that willingness to work but stay cool-headed and maintain an overview. A horse must certainly have blood, but blood in the body is different from blood in the upstairs department. If you go around the corner at top speed during a jump-off, a horse must stay cool-headed. A good horse thinks with you and always thinks the right way. As well as the pure will, the horse must of course be capable of doing it. His genetic background must be good as well as his exterior build. The better a horse is built and has natural balance, the more ease you have with ridden work.”

Nowadays, Sjaak can apply his vision not only to the trading business but also to his own stud. Getting started with his own breeding material has always been at the back of his mind. “I find the breeding fantastic. I want to use specific bloodlines that can add something to breeding and which people in the sport can enjoy. In my eyes you need to have horses that any amateur rider can enjoy. That is the basis. And if they can also compete at 1.60m-level then that is a bonus. That is the ultimate goal.” 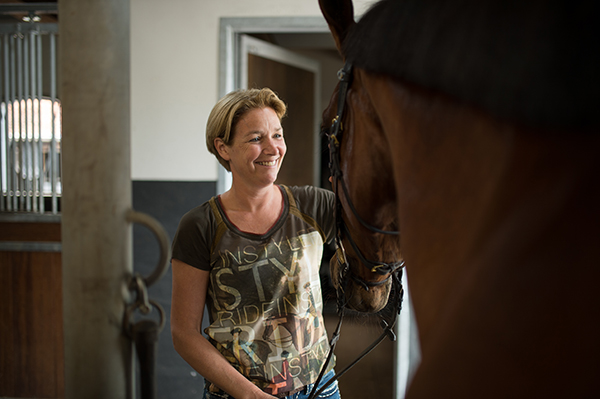 Together with partner Sjaak van der Lei, Jenny Toes is the founder of the business StuDutch. Both of them have had a passion for horses since childhood, but their backgrounds differ. Where Sjaak, as a farmer’s son in Groningen, grew up with horses, Jenny as a ‘town girl’ in Brabant had to initiate things herself. She says of that time: “As an eight-year-old, thanks to my neighbour, I ended up at the local riding school. I was immediately hooked. This was not to my parents’ delight. They would have preferred me to do ballet.”

Nothing could stop her love of horses. The riding school was Jenny’s place. “My parents realised that this was my thing. They saw that it made me happy. When I was eleven, I was given a pony from the riding school and later a bigger pony followed.” Jenny became a member of De Rooise Ponyruiters (De Rooise Pony Club) in Sint-Oedenrode, jumped up to M-level with her D-pony and rode at L2-dressage level. During those years, and later too, she was especially proficient in breaking in horses and ponies. “When I later started earning, I finally had the opportunity to buy myself a good horse. That had to be a mare, as I had always found the breeding-side fantastic.”

The purchased Hilde (Purioso x Farn) turned out to be a hit for both the sport as for breeding. She had already competed at Z-level jumping and Jenny then rode Hilde from B-level to Z-level dressage in just one year. Besides that she breeds 7 offsprings of Hilde who did compete at Z level or higher and 1 Grand Prix horse. At the age of 28 Jenny gave up her administrative accounting job and started working fulltime with horses. “At the beginning I concentrated on the breeding and on the breaking-in of self-bred horses, later also other people’s horses”. She rode many horses to Z2-level dressage after which they were sold, but she tried to keep the best (brood) mares. That the breeding went well is proven by the number of Grand Prix and PSG horses she has on her name.

Daughter Noa has the same passion for horses, right from a young age.  Jenny: “As well as my own competing I really enjoyed experiencing the pony sport with my daughter and it is  now more full filling for me then my own sport carreer.”

Nowadays Jenny is the driving force behind the scenes at StuDutch. She concentrates, partly due to her background, on the administration and is especially involved in the dressage branch of the business. “Breeding has always been my passion and dressage in particular. I have a preference for proven blood and will not use a young champion quickly.

I learned my lesson the hard way in the past. The best thing is when you can ride your own-bred horses. That produces the best selection as you yourself know what a good sports horse needs to have. I have ridden many difficult horses and know how simple life can be with good horses.”

Link to Stallions in horse-category

Link to Foals in horse-category

Link to Mares in horse-category

As far as our stud is concerned, we only seek the very best. We place high demands on our broodmares. They are selected for their bloodline composition, temperament, movement and health. Something the mare herself has can be passed on. In addition, we look for top progenitors: we want to leave as little as possible to chance.

Foals are born at our yard each year. A number of these are sold, the other foals are brought on by us and at a later age are made ready for the sport and/or for breeding. Are you interested in the youngstock we currently have? Please call or mail us for more information.

Most of the breeders know us from the stallions Cornet Obolensky and Kannan Jr. But as well as these stallions we also offer many other stallions for covering. We have both fresh and frozen semen from these jumping stallions and dressage stallions. We also offer ICSI. We are happy to advise you regarding which stallion would best suit your mare.

Are you looking for a sports horse? From within our own stud we regularly have good horses for sale. The horses vary in age and level of training. Are you interested in one of our horses? Please contact us. Together we can look at which of our horses suits your wishes best.